★★★★★ "an elusive hallmark of Fringe brilliance"  - Broadway Baby
★★★★ "engaging and hilarious throughout"  - Edinburgh Festivals Magazine
★★★★ "An extremely important and funny show … definitely not to be missed!”  - Arts Award Voice
"Pendal is set for a promising and possibly even mainstream career in comedy" - Fest Magazine

National LGBT Police Conference
Corporate Bookings
"So many of the guys at the event have been raving about you and how refreshing it is to hear comedy relevant to their experiences!" - Gary, organiser of BearScotFest

​"John was the perfect headliner for our event. We'd love to have him back." - Ben MacLean, Emcee, Folsom Europe 2017 Entertainment Stage, Berlin

"John had the audience in stitches, we will certainly be booking him again." - Lee Broadstock, National LGBT Police Conference

"John did a stellar job and the crowd loved him - he is always welcome at our event" - Rich Dockter, Director of Thunder in the Mountains, Denver, Colorado 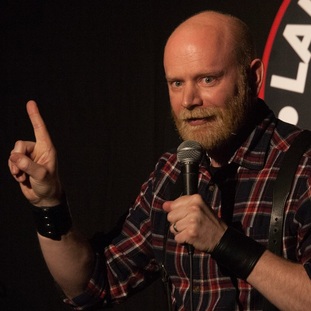 Sept 2015 - Sunbury on Thames
Quotes about John as an M.C.
"John's easy going style quickly put the crowd at ease. He read the room brilliantly and pitched his material just right for a very mixed audience. John has a really professional attitude, he has no edges and you can rely on him to do a great job."
Jon Fentiman, Wanstead Comedy Club

"We cannot thank John enough for his outstanding job as our MC. This year was the 10th contest in a row that John has come all the way from London to host for us. He was in top notch form with jokes and zingers throughout the night."
David Boyer, Mr Chicago Leather promoter

"John is more than funny and even more than poised under pressure. His quick wit, sharp tongue and taking ownership of the stage made our live events the best yet."
Jon Krongaard, Executive Coordinator, International Mr Leather Inc.

"John Pendal was in top form and had the crowd roaring with laughter." - Windy City Times (Chicago)