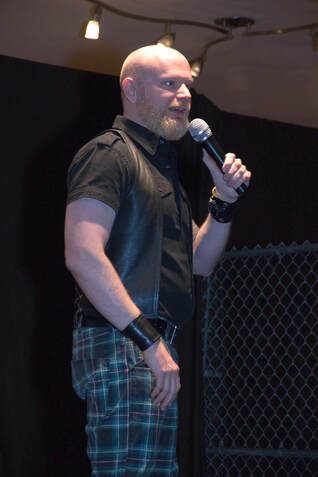 Feb 2018 - on stage in Edmonton, Canada (photo by www.polishedpixel.ca)
Hi John - what nationality are you?
I’m British, born in Watford and lived in England all my life.

What’s your style of comedy?
My persona is “cheeky puppy dog”. I’m very happy to be on stage and my material is quite playful. There are lots of autobiographical stories. If I'm playing a post-midnight show I have some ruder material, but I also have clean sets for churches and school halls.

Do you drive?
No. I had bacterial meningitis age 25 which nearly killed me. I’m fine now but still have problems with spatial awareness and manage to concuss myself every few months. It’s not a good idea for me to be behind a wheel, so I get to gigs via public transport or car sharing with other comics. 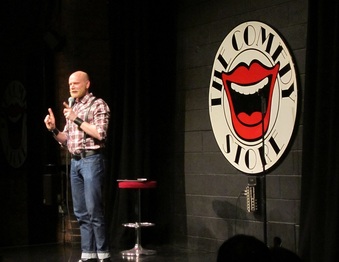 What did you do before you were a comedian?
I had a career in television for 15 years: 10 years working for broadcasters (desk job, behind the camera) and 5 years working in post production.

What made you change career?
In 2003 I took a year off because I won the 25th International Mr Leather competition in Chicago. If you win it’s a huge deal – just part of the prize was a 100th anniversary, special edition Harley Davidson! I travelled all around Europe, USA and Canada attending different kinds of events but always speaking from a stage. At the end of the year I continued to travel internationally hosting fundraisers, talent shows and leather contests. In the end I decided I preferred telling jokes to a regular job and made the leap.

How easy did you find the transition from leather events to comedy clubs?
Much harder than I thought. Going into a mainstream comedy club there’s very little overlap between my life experience and that of the average audience member, so I’ve had to find a way to bring people into my world. Part of that was developing different sets for different audiences, and now I have experience ranging from university students to rural village halls, and military bases to gay nightclubs. 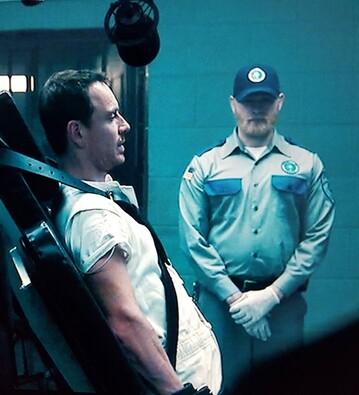 Having just tied up Michael Fassbender in Assassin's Creed (2016)
Do you still travel internationally?
Whenever I get the chance. I’ve hosted the Mr Chicago Leather contest every year from 2004-2019. I've performed solo shows in Atlanta, Bergen, Budapest, Chicago, Cleveland, Denver, Edmonton (Canada), Fort Lauderdale, Melbourne, Oslo, Rome and West Palm Beach. I’ve done spots at Folsom Europe in Berlin, Laugh Track in Chicago and the New York Comedy Club, and in 2012 I returned to the International Mr Leather stage to co-host their 34th contest.

Do you do anything else?
I work part-time during the day as a stand-in during camera rehearsals for TV panel shows, including Mock the Week (65 episodes 2010 to 2020 for BBC2), Mad Mad World (6 episodes for ITV) and Namedroppers (pilot). Also as a supporting artist for Tricked (ITV) and New Blood (BBC1), McMafia and Holby City (BBC1). I tied up Michael Fassbender to be put to death in Assassins Creed (Jan 2017), and was the first person killed after the opening credits in No Time To Die (Oct 2021)..