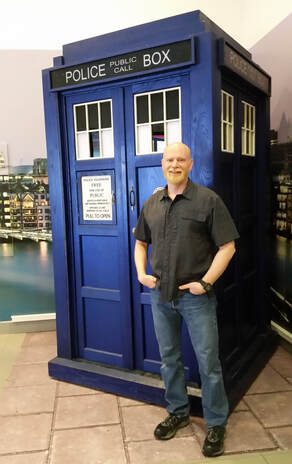 As lockdown eases and we meet in person again, there’s an increased chance that some of us will have to mask who we are in social situations. That might be hiding your sexuality or who you love, autism/ ADHD, kink side, or personal beliefs for example.

It would be nice as a coach to say “live you authentic life at all times!” … but authenticity is a privilege and sometimes we have to go under the radar for our own safety or emotional protection.

What can we do to minimise the emotional cost of fitting in with others? Here are some thoughts and suggestions – feel free to use any that are useful to you:


Most importantly, build in spaces in your life where you can be yourself with other people. Use these to recharge and remember you are not alone and there’s nothing wrong with you. 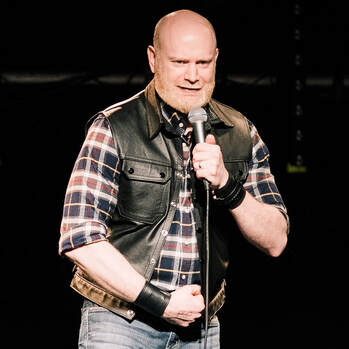 I've had a few requests for help with public speaking: either in person at live events or down a camera for online work.

Here are some tips & suggestions that might help. Feel free to take any that are useful:


Hope that helps. You got this! x 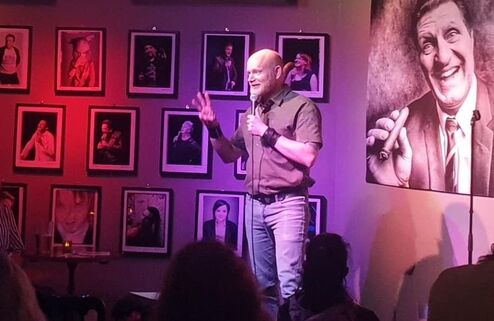 A few people have asked if I'll return to stand-up comedy. I don't want to rule anything out, but right now the thought of being in a room with a low-ceiling, full of people sat tightly together laughing at jokes make my hands very sweaty.

I've noticed there's increasing anxiety for some of us as lock-down restrictions are lifted. It might be because there was part of the last year that you liked, such as being able to work from home or not having to make small talk with strangers. For others it's an anxiety that we're doing things at different speeds, and there's a pressure to go to out or socialise before we're ready.

One thing that can help when you've lost some confidence or feeling stressed is to acknowledge your accomplishments, however small they may be. It might be brushing your teeth that day, or digging up one weed in the garden. It might be returning to a shop you haven't visited in a year, or saying "hi" to a stranger on a walk.

Each day I look for the "Little Victories" - and that takes the pressure off me trying to come up with a big thing that I'm not ready for. 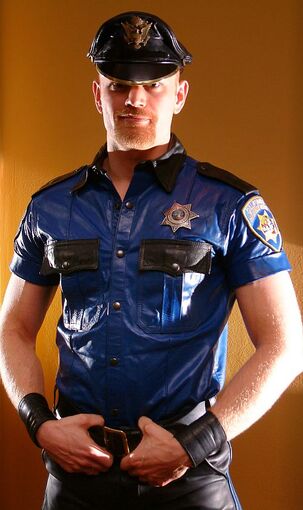 Feb 2003 - photo by David Harris
In 2003 I accidentally won the "International Mr Leather" contest in Chicago. (It wasn't any kind of plan, I just wasn't very good at saying "no" to things back then.) The result threw me headlong into a world of kinky conventions and events, which I LOVED. It was only fifteen years later when I realised I was autistic that suddenly things made sense.

This isn't speaking for anyone other than myself, but here are some of the reasons kink is perfect for my autistic mind:

1) I can't tune out distractions in vanilla pubs and clubs. Even the mildest gay pub usually has shouting to get a drink at the bar and a mirror ball. Any place with a dance floor is deafening loud with spinning lights or a laser show.

Compare that to your average kink club: subdued lighting, static white spotlights on equipment, low music to provide atmosphere but not spoil the play.

And if you need things really quiet I thoroughly recommend rope dojos/ Shibari practice clubs. The silence while people concentrate is delicious.

2) Trying to chat people up for vanilla sex completely mystifies me. There are no rules. You're meant to have a natural, unstructured conversation that puts you both at ease? Not happening for me.

Compare that to kink style negotiation. Someone in charge. CONVERSATIONS HAVE A POINT. If you're lucky there's a questionnaire! If you're shy you can respectfully submit a journal. Topics to cover, questions that need to be asked (needs/ wants/ desires/ limits/ past experience/ relevant history). So much easier and more direct. It's almost as it kink was created with autistic people in mind.

3) People are regularly wondering how I didn't pick up on social cues in everyday life. Kink has lots of visual aids that can help. Bag full of rope? Probably into tying people up. Metal chain around their neck? Might be in a relationship. Black and white check handkerchief back pocket? Into safe sex.

Thank you to whoever made it that obvious.

4) I'm not a fan of mess. I know some kink can be REALLY mucky, but let's face it if you want to wipe down surfaces with mild bleach before you have sex a kinky player isn't going to mind. They'll probably respect you for thinking ahead. Looking at scenes I've been drawn to, they were all activities I could wipe everything down before and after.

6) I love intense sensations that I've asked for - they seem to drop my thoughts into my body and turn my brain off, calming me down. (Mind you a tiny sensation I haven't asked for, like a dripping tap, will drive me nuts.) Talking to other autistic people many of us seem to like sensations that take us out of our heads, like sleeping under a weighted blanket. I look back on my favourite kinks and now I think "WAS I JUST LOOKING FOR A WEIGHTED BLANKET?!!"

There will be different reasons for every person, as every autistic person is different, but the world is making a lot more sense since my diagnosis.

If you'd like to chat any of this through with someone who "gets you", please get in touch. You can fill in the form at www.johnpendal.com/contact.html or email johnpendal.coach@gmail.com

I was on a zoom call yesterday about safeguarding. One of the participants said she'd introduced an Aunt to her 11 year old daughter as a "nominated believer" - someone you can always go to and will always believe you.

That has really resonated with me. It's a great idea, not just for every woman or every child but for every PERSON.

Do you have a "nominated believer"?

Could you be that person for someone else?

One of my coaching diploma trainers, Emma Dempsey, interviewed me about what it was like to be an autistic coach for The Coach Collective Facebook group. (Emma's website is http://emmadempseycoaching.com)

If you have a stressful job, volunteer for a committee or struggle to say "no" to people then the 20% rule might help you.

I once had a job at a busy TV production company where we made internal phone calls to each other all day long. One day a colleague stood in my doorway, red-faced, fists clenched, absolutely furious that I’d hung up on her. I honestly didn’t think I had. I couldn’t work out why she was so angry.

Eventually I asked “are you upset because I didn’t say ‘goodbye’?”

Yes. That had sparked the fury.

I apologised and tried to make up for it … but after that I listened in to how other people’s internal calls ended: some said goodbye, some didn’t.

I asked around to friends in the building: “am I ever rude on the phone?”

So I vowed that day to end every work call with “goodbye” – even if it was just a short question from a colleague. Sometimes they let me, other times they hung up before I could say it.

It stressed me out.

When the company finally closed with the loss of all jobs it was meant to be really sad – except there was a part of me that was secretly pleased that never again would I have to worry about whether or not I should say “goodbye” at the end of a work call.

Since then I’ve discovered I’m autistic and a lot of things have fallen into place … but I still have a regular feeling that a conversation has gone wrong and now someone is upset with me and I have to work out why. That feeling of “I’ve been stupid again” is really hard to shake off, and feels like a lifelong companion.

I brought this to a coaching session and my coach said: “if thinking you’re stupid is a negative response to the situation, what would a neutral response be?”

It took a while, but I settled on “I’m different” as an alternative thought.

Then the coach wanted me to turn that into a positive. That was much tougher. Sometimes when I can’t see an answer I REALLY can’t see it… I said to the coach: “you’re going to have to help me with that one.”

The coach pointed out how many people come to coaching because they want to be uniquely themselves. My autistic traits mean I’ve been unique my whole life without trying! A lot of times I’ve done things without realising there were societal norms holding me back. This is an area where my difference is something I can help other people with. 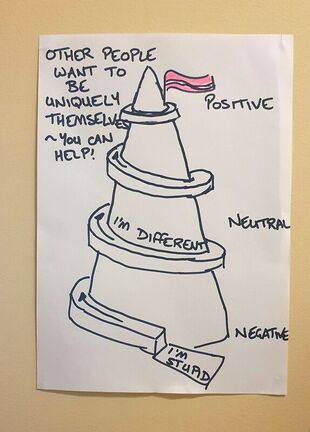 After that session I drew a doodle of my slide (for those old enough to remember fairground rides it’s meant to be a helter-skelter). Instead of seeing it as a downward slope to a crash mat, now I picture myself going up the tower to help other people. I’ve had it pinned to the wall next to my computer ever since and it’s really helped.

If you have negative thoughts you’re struggling with – try asking yourself what the neutral version would be … and then reach for the positive. If that’s too hard to do on your own please get in touch. Together we might be able to come up with a helter-skelter that works for you.

As part of my coaching diploma we had a session on 'strokes', which they defined as "a basic unit of human recognition". Strokes can be verbal or non-verbal, positive or negative, unconditional and conditional ... and as coaches we need to know what kind of 'strokes' we are sending out.

The tutor asked us to give examples of a negative, non-verbal, conditional stroke and I immediately thought of my twenties when I'd go clubbing at the weekend with the intention of hooking up - and if you were lucky it would go really well but if you were unlucky you'd literally get 'two taps' from their hand on your body to say "move along". If you were just cruising each other and had only made eye contact that was bad enough ... but if you were half-way through making out (especially if you were really going for it) and they gave you "two taps" that was THE WORST. Sometimes I'd be on my guard and try and two tap them before they two tapped me - which was embarrassing if they had no intention of two-tapping me and I'd just misread the situation.

As usual when my mind went somewhere mucky on a zoom call I turned my web-cam off, and a few of the other students who knew me well began messaging to ask what the joke was. So I had to explain to people who'd never been to a gay club what kind of fun we got up to and what "two taps" meant.

The other day one of them sent me this emoji message. It's my new favourite way of ending an online conversation.

Have a great weekend everyone. Hope you give & receive lots of positive, unconditional strokes x
If you would like a complimentary coaching session with John please fill in the form here.