"In what may well be the most pleasant hour you experience during the Fringe, John Pendal’s show We Are Family makes you feel just like that: family" - Edinburgh Festivals Magazine 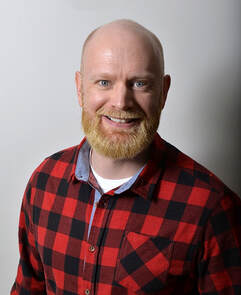 It’s aimed at anyone anxious about the current state of the world
... or finds their family sometimes annoys them.

The show has been performed in Brighton, Cambridge, Edinburgh, Leicester, London, Manchester and York.​
Last performance: August 2018 at the Edinburgh Festival

(John has performed over 1,200 gigs since 2010. His first two shows “International Man of Leather” and “How to Escape From Stuff” won the hearts of audiences and critics alike and went on to tour Atlanta, Chicago, Cleveland, Denver, Edmonton (Canada), Fort Lauderdale, Melbourne, Oslo and Rome.​)
Videos
(Video production by julianlangham.co.uk)
Press 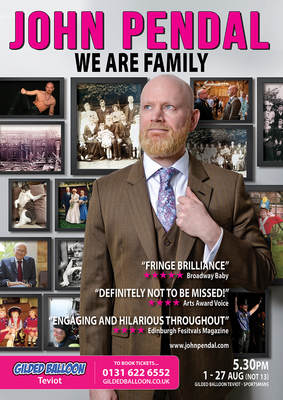 Poster by Steve Ullathorne
Edinburgh Festivals Magazine review: "In what may well be the most pleasant hour you experience during the Fringe, John Pendal’s show We Are Family makes you feel just like that: family.
Everyone will find something they connect with in this act. That’s the real beauty of Pendal’s show. Even if your family are not blood relations, there is something to find familiar. A fully relatable experience of good-hearted, sometimes sinfully rude, but often safe laughs."
www.edfestmag.com/general/review-john-pendal-we-are-family-at-gilded-balloon-teviot/


The List review:  "Universal tale of uncovering a family's excitingly dirty laundry ... A thoroughly enjoyable hour."
"Pendal is a charming and affable storyteller and the tale is constructed as smartly as his neatly clipped appearance. There are some nice contrasts to be enjoyed here too, with him having a buttoned-up religious upbringing before being crowned Mr Leather in 2003."
https://edinburghfestival.list.co.uk/article/102494-john-pendal-we-are-family/

VoiceMag review: "John is likeable and endearing, making the audience feel immediately comfortable. He makes astute and witty observations about family life that are relatable to everyone: he had the whole audience nodding in agreement at various pet peeves we all suffer from.
I was pleasantly surprised and very touched by John’s openness in sharing personal memories of his relationship with his father. As well as a feel-good comedy this show is a story of acceptance and the ways a family can come to terms with each other."
www.voicemag.uk/review/4412/john-pendal-we-are-family

Scene Alba magazine chose We Are Family as one of their "picks of the Fringe", with an interview on page 19 of their August 2018 issue: www.scenealba.co.uk

​The List Festival Magazine picked We Are Family as one of their five best comedy storytelling shows: "Everyone's family tree will throw up tales and secrets, but not many can tell them like Pendal."

I was also interviewed live on Fresh Air Radio, which you can hear at: https://soundcloud.com/johnpendal/fresh-fringe
Audience Feedback 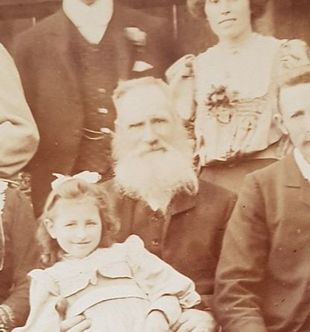 This is John's Great Great Granddad. Also called John Pendal. My, what a beard.
"It's part therapy and part stand-up. Highly recommended for anyone who has had issues with family members" - Nigel, Brighton

"John's show is the funniest way to learn that families are insane and beautiful and not always what you'd expect" - Luna, London

"Laughed at and loved this hilarious tale of one family. Will never speak to my own Dad the same way again" - Harvey, Surrey

"Loved this show, it was supposed to be about John’s family but actually you will recognise your own" - Ruth, Brighton

"Thank you for your hilarious and personal show. It's a talent to be able to give others the feeling of stepping out of their own mind into someone else's story." - Marta, London

"Loved hearing about other people's families, they often do sound worse than your own!" - Kerry, Suffolk

"Fantastic show! John shares his fascinating  family stories in his own hilarious way. I urge anyone to go and share the fun" - Liz, London
To book this show please fill in the contact form here
Media enquiries please contact Paul Sullivan PR at paul@paulsullivan.info
Powered by