"HOW TO ESCAPE FROM STUFF" 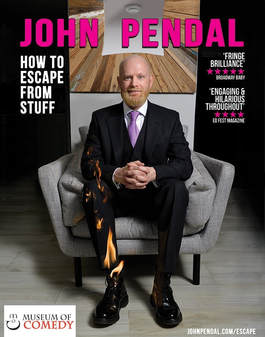 Poster by Steve Ullathorne
In his second solo show John looks back on the decade he spent as an amateur escape artist.

It began when he was tied up by missionaries on a Welsh beach and ended with him tying up Michael Fassbender in Assassin’s Creed.

This show has been seen in Brighton, Denver, Edinburgh, Edmonton, Hastings, Leicester, London, Manchester and York.

To book this show please fill in the contact form here
Press
The Telegraph chose one of my jokes for "The 40 funniest one-liners from the Edinburgh Festival so far."
http://www.telegraph.co.uk/comedy/comedians/edinburgh-fringe-comedians-funniest-jokes/john-pendal/

The List: "smart observations ... tie everything together nicely."
https://edinburghfestival.list.co.uk/article/93856-john-pendal-how-to-escape-from-stuff/

'On The Mic' podcast by Martin Walker of Broadway Baby
www.mixcloud.com/OntheMic/episode-380-john-pendal/
Videos
During the show I invite a volunteer to put me in rope handcuffs so I can explain how to escape. One day the volunteer was really serious about it, so I suggested we have a challenge in the bar afterwards. Half the audience came to watch.  1 minute 26 seconds, that's all I'm saying .... (a lot quicker if I had't been wearing a shirt!)
There are more clips from the show and escape challenges at ​www.youtube.com/johnpendal
Images
​Media enquiries please contact Paul Sullivan PR at paul@paulsullivan.info
Powered by